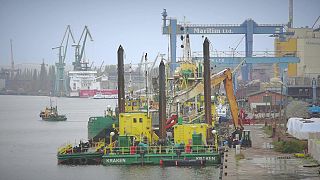 This edition of Real Economy comes from Bologna in Italy and Poland and focuses on the regions Smart Specialisation plans.

Euronews’ Maithreyi Seetharaman visited the heart of the Emilia Romagna region in Italy to see how it, and other places like it, are modernizing, investing and innovating to grow their economies with the sectors they are already strong in.

In order to encourage regions that maybe lagging behind, to bring innovation into their industries – it’s important to offer them an incentive. So now in order to tap into the European Regional Funds they all must have a Smart Specialisation plan. That gives them access to the 40 billion euros, set aside for Research and Development. So what exactly is Smart Specialisation? Let’s find out and imagine ourselves somewhere in another galaxy.

On the imaginary planet of Zod there are more sheep than Zodopians, making wool and yarn a key sector of their economy. But their products are too simple and not competitive.

Zodopians soon realised to survive they needed to improve, diversify and modernise. So they brought everyone together, the rulers, civil servants, shepherds, weavers, teachers, traders and even asked innovators, researchers, designers and technology experts to join in.

All together they brainstormed for innovative ways to combine technology and their core strength for a smart plan for new opportunities and markets.

When big Zodopian business tried to influence the plan the other Zodopians said everyone would contribute ideas and even took expert help from elsewhere in the galaxy.

With initial funds and support from the galaxy Zodopia’s Smart Specialisation strategy soon had private investors clamouring to invest. So propelling a poor Zodopia toward growth.

In the Emila Romagna region they’re pushing Smart Specialisation in things they are known for, mechatronics, motoring, construction and of course here in Bologna, they’re known for culture and creativity.

Regional minister Patrizio Bianchi has been at the centre of this strategy and he is also a professor of industrial economics. He has already started seeing results when it comes to this strategy

“We have had a great result,” explains Bianchi. “Specialisation, Smart Specialisation means working together and we are inducing people to work together. We have around 50,000 employees more, but we also have 1,000 more researchers. This is the idea and this is also the way we want to follow in the future – to put the universities, to put the companies, to put also vocational training to work together.”

That gives a snapshot of a region, but can Smart Specialization really be a driving force for growth for all of Europe’s regions?

Euronews’ Denis Loctier headed off to Poland to find out.

“Poland, and also Europe, are ageing. We live longer, and we want to live healthier and better. So we need smart products,” explained Milena Supernak-Marczewska, R&D coordinator, Vivadental.

Euronews visited a dentistry centre in Gdansk that works on personalising implants and regrowing bone tissue from patient’s own stem cells. To develop these cutting-edge technologies, it teamed up with a local university and a pharmaceutical company. This collaboration is one of the winners of this region’s Smart Specialisation funding.

“In 2014 the Smart Specialisation competition started. So it was obvious for us that we should join in this process, because we knew the potential of the Gdańsk University of Technology and of our centre, and we also knew what the patients need,” added Milena Supernak-Marczewska.

Unlike other regions, Pomorskie only defined its specialisations after receiving concrete R&D proposals from business and research organisations. It relied on experts to select those with the highest potential.

This bottom-up approach allowed to narrow the wide selection of projects down to four R&D areas – medical, logistics, interactive IT, and eco-efficient energy. That engaged around 300 private companies who provided the other half of the funding, complementing the 250 million euros alloted from the regional fund.

“Public source of funding is not the only source of funding; the company also should engage its own capital. I think it’s good for the effectiveness of the projects, and also to have this sustainability in financing sources,” added Karolina Lipińska.

In Poland, the private sector provides on average less than 40% of R&D expenditures. In the Pomorskie region, this indicator is getting closer to the EU average of 55%.

Patrizio Bianchi, minister in the Emila Romagna region, joined Euronews in the studio.

Euronews: “Still with us is Minister Bianchi. If you look at statistics, what kind of potential does this strategy have for growth and for job creation?”

Patrizio Bianchi: “We have to explore all the possibilities to use technology, to allow everybody to have a better life. This is the potential. There is an enormous quantity to create new companies, new services but also new research to listen, to understand and also to work with the people.”

Euronews: “What about regions that have more traditional industry, that are more rural. How do they identify their core strengths and then drive innovation investment pipelines towards that?”

Patrizio Bianchi: “I believe we are now facing an extraordinary moment of a great revolution in agriculture activities. Not huge fields of generic production, but specific production for that climate, for that kind of product. Exploring the possibility to have also new new kind of goods.

‘There is a lot of innovation in this field. Now we have concentrated innovation in industry. Now is the moment also to introduce the possibility for the people in rural area to use and to exploit technology.”

Euronews: “Well there are also hurdles like incumbent industries driving agenda, governments setting industrial policy. How do you get past that?”

‘There is no Smart Specialization if there is no smart cooperation, smart complementarity, the capacity to work together for growth. This is the key of the new industrial policy to create linkages.

‘So this idea, this comprehensive idea of a society which is able to generate movement, to generate innovation this is Europe and this is the way we have to look for changing the present Europe,” he concluded.