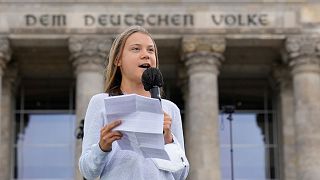 Greta Thunberg says it would be "a mistake" for Germany to switch off its nuclear power plants if that means the country must burn more climate-wrecking coal.

The German government is still debating the future of its nuclear plants, long set to be shut down this year, given the spectre of a looming energy crisis due to the war in Ukraine.

The climate activist told German public broadcaster ARD that it was “a very bad idea to focus on coal when this [nuclear power] is already in place.”

But she acknowledged in the interview, aired today, that there was a strong debate over the issue in Germany.

Asked whether it would be better for the planet if Germany keeps its three remaining nuclear plants going, Thunberg responded: “If we have them already running, I feel that it’s a mistake to close them down in order to focus on coal.”

Pressed by programme host Sandra Maischberger on whether she thought the nuclear plants should be closed down as soon as possible after the current energy crunch passes, Thunberg said “it depends. We don’t know what will happen after this."

Is Germany going to shut down its nuclear plants?

The 19-year-old's comments come as Germany's three-party governing coalition argues over the possibility of suspending the country's nuclear phaseout.

Economy Minister Robert Habeck, a member of the anti-nuclear Green party, has said keeping the reactors running would do little to tackle a gas shortage.

He recently suggested that two of the plants could exceptionally operate until April but opposes running them longer for safety reasons. Habeck has separately approved reactivating several coal and oil-fired power plants to ensure energy supplies following Russia's decision to cut natural gas deliveries to Europe.

Environmental activists warn that Germany risks defaulting on its climate goals by burning more fossil fuels, while conservative lawmakers say the government should use all available means to generate energy given the tense supply situation and high prices.

Thunberg's nuclear comments were welcomed by libertarians and right-wing German politicians who have previously been dismissive or sharply critical of her activism.

The teenager, who is currently finishing high school, said Germany's decision to rely on coal plants showed “what happens when you are too addicted to these kinds of fossil fuels.”

She slammed plans to invest in new fossil fuel infrastructure and said the focus should instead be on expanding renewable energy. The German government insists that new gas plants must be capable of using clean hydrogen and that it's boosting wind and solar power production.

Thunberg noted that politicians in some countries, such as Sweden, are opposed to suggesting that people should save energy, even though this could lower prices.

Energy-saving campaigns have a role to play too

“I know that in Germany people are talking about saving energy,” she said. “But in Sweden it’s completely prohibited to talk about using less energy really, because then people say, ‘Oh no, this is communism and so on.’ So it’s completely insane.”

Thunberg, who was promoting her new book on climate change, said she does not believe there is a single silver bullet to solve the problem, but that as a first step it's important for people to recognise the enormity of the crisis that humanity faces from rising temperatures.

“I’m realistic because if we do the things that we need to do, we can avert this catastrophe,” she said of the future. “But if we don’t, then we will have to suffer the consequences. So it’s up to us.”