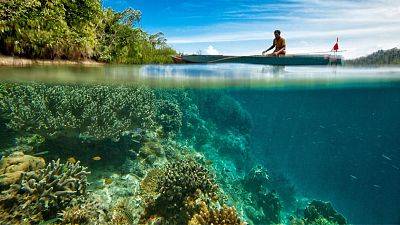 When Hesham Zaghloul began his career as a diving instructor in Egypt’s Red Sea resorts in the 1990s, the tourist influx was only just starting to pick up momentum.

As millions of visitors flocked to enjoy some of the world’s richest coral reefs, Zaghloul saw first-hand the damage done by the anchors of their yachts to these delicate underwater ecosystems.

“We killed our own livelihood each time we dropped yacht anchors into the sea. They would hit corals, immediately killing them,” the now 50-year-old yacht owner tells Euronews Green. “But we had no other option” to moor boats, he says.

Witnessing the bleaching of lifeless corals under the weight of anchors, along with the growing stream of beach-loving tourists, a group of environmentalists and businessmen decided to do something about it.

They independently created an alternative that Zaghloul and others needed: mooring buoys.

“The aim was to eliminate the damage done to coral reefs in the Red Sea by creating an eco-friendly method of anchoring for tourist and fishing boats,” explains Mustafa Abdullah, leader of the buoys team at the Hurghada Environmental Protection and Conservation Association (HEPCA), the non-governmental and non-profit group founded in the wake of this initiative.

As early as 1995, HEPCA started installing buoys in key diving destinations all along Egypt’s Red Sea coastline, ultimately establishing what it says is the largest mooring system in the world.

What are moored buoys and how do they work?

According to Abdullah, over 1400 buoys have been installed by HEPCA along the Red Sea. 1300 for public use, and over 100 to serve private beaches.

As the buoys proved successful, the NGO’s expertise was sought after by Saudi Arabia and Jordan to install similar ones along their Red Sea coastlines, especially as Riyadh is planning mega tourism projects on its shores, Abdullah added.

With a total cost exceeding 12 million Egyptian pounds (around €674,000), HEPCA’s members - currently 65 - have largely funded the construction and maintenance of the publicly-used anchored floats. Except for one 1997 USAID donation that financed 250 installations, he added.

Each buoy is made up of three components - an anchor permanently fixed to the seabed that can weigh up to 4.5 tons, a buoy floating on the water surface to which a boat is tied, and a connection between the two parts.

“A buoy fixed to a flat solid bedrock varies from that planted in a sandy area,” he explains, adding that experienced drivers are necessary to carry out both. While the Halas system, which is used in solid regions, involves drilling and cementing a bolt deep in the ground and then waiting for 72 hours before attaching the buoy, the Manta-Ray is quicker, with a metal anchor being driven into the ground, and the buoy attached right after.

Zaghloul, who has seen these installations multiply over the years, says their impact is unquestionable. “Corals aren’t destroyed [as frequently] as before,” he said. “This doesn’t rule out other harmful factors, but it would have been much worse without these buoys.”

The grave impact of tourism on the environment

Studies have proved that the delicate marine ecosystems have suffered gravely due to Egypt’s tourism surge. According to a 2018 paper, the coral cover in the Gulf of Suez shrank by 210 square metres between 2000 and 2014 - with the number of coral species decreasing from 21 to 14. And the percentage of dead coral cover increased from 23.8 per cent to 47.9 per cent as a result of tourism activities.

Mahmoud Hanafy, professor of marine sciences at Suez Canal University and environmental advisor to HEPCA, estimates that the destruction of coral reefs along Egypt’s Red Sea coastline would have been 70 per cent higher if it wasn’t for those buoys.

“One boat’s anchor can damage one metre square of coral reef at a time. There are 2,000 licensed tourism yachts operating in the Red Sea governorate. They would have rapidly destroyed the roughly 400 square kilometres of corals lining the coastline,” he explained.

Corals are a “national asset” as they bring in over seven million tourists each year.

Describing corals as a “national asset” for bringing in over seven million tourists each year, Hanafy said “the destruction of one metre square of corals costs the country up to $300 (€264), and would take a 100 years to regenerate”.

HEPCA’s mooring project “not only preserves tourism in the region, but also maintains an integrated ecosystem in the Red Sea that supports over 400 species of coral, 1,500 species of fish, 4000 species of mollusks, and six species of sea turtles. If the corals are lost, the entire system will be lost,” says Farouk.

Recklessness at the expense of coral

In a country where tourism accounts for up to 15 per cent of the economy, coral is a crucial contributor. On-reef related activities, like snorkelling and scuba diving, bring Egypt $7 billion (€6.2 bn) in revenue each year, making it the world’s largest revenue maker in a global coral reef tourism industry that generates $35.8 billion (€31.5 bn) annually.

Pressure on the vibrantly-coloured corals has exponentially risen, adding strain to the threat of climate change which is expected to erode the country’s coral cover, with estimates of Egypt losing up to $5.6 billion (€4.9 bn) each year by 2100.

Karim Mundi, a diving instructor in the resort of Hurghada, recounts how anchor dumping destroyed nearly 300 square metres of a once-popular diving spot in Fanadir Island, off Hurghada. In the absence of mooring buoys, “divers exploited coral reefs to moor their boats, until they perished and turned into hard stones,” he says.

Mundi also notes that the buoys regulate tourists' traffic around diving sites. “Boat owners are forced to stick to certain locations for diving. Buoys also help limit the number of divers swimming at one site, as they can only accommodate several boats at a time. This made it easier to spot and punish violating tourist boat owners,” he said.

Despite workshops organised by HEPCA to encourage and train yacht owners on how to use these mooring floats, and decades-old laws that criminalise the destruction of coral reefs - including article 28 of the Egyptian Environmental Law No. 9 of 2009 which sentences violators to six months in prison and a fine of up to 50,000 pounds -, many choose to anchor their yachts the traditional way, harming marine life, Abdulla says.

“It’s out of ignorance, recklessness or just wanting to please tourists at the expense of coral. Around 80 per cent of boat owners comply. But those who don’t, get reported on [to the authorities] and penalised,” he concludes.

Buoys can save our favourite diving spots too

According to Hanafy, tourist yachts have tripled in number between 2004 and 2020, and have grown in length, from 20 to 30 metres, making it difficult for HEPCA to keep up. The increase “mandates an annual expansion in installed buoys, as well as raising the expense of repairing them,” he says.

According to his estimates, Hanafi says some diving locations in Egypt receive tenfold the average carrying capacity of 6,000 dives a year, after which the impact on coral reefs becomes apparent. Reef Check, a non-profit organisation that works towards sustainable reefs, reported in 2010 that some reefs in Egypt’s Red Sea are visited more than a 1000 times a day.

For many diving instructors, including Zaghloul, HEPCA has provided a priceless service to tourism, and it’s up to those involved to do the rest.

“They’ve served us a lot, and we try to cooperate. They’ve preserved the corals and reefs. If they were left to be destroyed, we would’ve lost our livelihoods forever.”