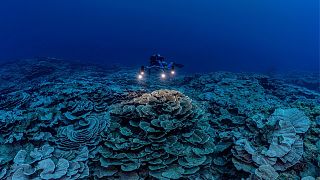 Sometimes it feels like there is nothing but bad news in the battle against the climate crisis.

We’re overrun with stories about deforestation, biodiversity loss and declining ecosystems - all of which fill us with fear and dread.

But this week, scientists in the South Pacific gave us cause for optimism.

Diving in the waters off of Tahiti’s tropical coastline, marine researchers uncovered one of the largest coral reefs ever found. And, unlike many of its counterparts, it appears to be completely unaffected by human activity.

"When I went there, I discovered an amazing reef that was made of giant coral shapes,” says Laetitia Hédouin, a researcher who first detected the corals while on a recreational dive.

“It’s so wonderful. And what is very interesting is that the reef seems to go on forever."

A cause for optimism

Although they occupy just 0.1 per cent of the ocean floor, coral reefs are home to a quarter of all marine life. These complex aquatic networks provide animals with shelter and food while also protecting coastlines from the impact of storms and waves.

Annually, it is estimated that over half a billion people depend on them for food, income and protection, contributing nearly €360 billion to global economies.

Tahiti’s newly discovered reef network stretches for three kilometres and includes distinctive rose-shaped corals - one of the rarest forms of this sea animal.

"Some of them could be two metres in diameter, so this means that the colony is kind of old, almost 20 years," says Hédouin.

"When you discover coral that seems to have gone through human activity without any impact, it’s just amazing. There is no sign of disease. There’s no mortality.”

Unlike most of the world's coral reefs, which are found in relatively shallow waters, this one is deeper - between 35 and 70 metres.

It gives hope that similar discoveries could soon be on the horizon.

"We say right now that this reef is impressive and I think it's true, but we know so little about this deep part of the coral reef," says Hédouin.

"Potentially, we could discover hundreds of sites like this. We just need to pursue that exploration in the deeper parts of the reef."

Exploring at such depths poses a challenge for researchers. The deeper a diver goes underwater, the shorter the amount of time can be spent at each depth.

Equipped with special tanks, marine experts completed 200 hours of diving to study the reef, including taking photographs, measurements and samples.

"We'll be seeing more of these discoveries as the technology is applied to other locations,” says former National Oceanic and Atmospheric Administration oceanographer, Mark Eakin.

“But they are still unusual. We'll find more of these, but I doubt this will become a common thing.”

This discovery is a ray of sunshine in an otherwise bleak era for coral.

Between 2009 and 2018, 14 per cent of the world's reefs were destroyed, according to a 2020 report by the Global Coral Reef Monitoring Project.

This is a result of overfishing, pollution and climate change - with the latter instigating a deadly phenomenon known as bleaching.

As ocean temperatures rise, symbiotic algae in the coral turn white - a process that has dire consequences for the vitality of the entire reef.

A particularly destructive bleaching event took place in the waters off of Tahiti in 2019, when over 50 per cent of corals around the tropical island turned white.

It’s for this reason that researchers were surprised to uncover a pristine network of reefs in the very same area.

“They haven’t been impacted by human stress, bleaching or other pollutions at all," says Hédouin.

"It's going to be subject to some of the same threats,” admits Eakin.

“I think it has managed to dodge the bullet. But you know, the question is how long is it going to be before we get an event that's that deep in that location? And it suffers the same fate."

So far, scientists believe the depth of the newly-discovered reef has protected it from rising temperature levels in shallower waters.

They hope this discovery will lead to a better understanding of how climate change impacts coral networks, allowing researchers to conserve and protect pre-existing ecosystems around the world.

"The bottom line is that we know very little about the ocean and there's still so much that needs to be recorded," says Julian Barbiere of UNESCO, the United Nations body which led the research.

"We only have about 20 per cent of the ocean floor which has been mapped in high resolution, and it's amazing when you think that we have a better picture of Mars.”

But with more dives planned in the coming months, there is finally hope that the era of coral decline may be coming to an end - and a new age of discovery could be fast approaching.

Watch the video above to see the pristine coral reef.