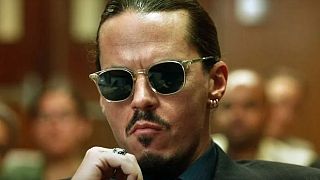 Well, they didn’t waste any time with this one.

Just four months after Johnny Depp’s highly-publicized defamation trial against Amber Heard, the whole sordid affair has been adapted into a film.

First we’ve heard of it.

The film is directed by Sara Lohman (Off The Grid), scripted by Guy Nicolucci (The Daily Show), and stars Mark Hapka and Megan Davis as the warring exes.

Tubi will show the film free from today in countries where it operates, which includes the US, Australia and New Zealand. It is not yet available in the UK or EU, without a decent VPN, of course. Which might not be a bad thing considering the trailer, which may make you cringe so hard your gallbladders will explode into a million fleshy bits:

Leaving aside that Hapka looks nothing like Depp, the goatee is out in full force in what looks like a glorified college project. There’s moody lighting a-go-go, mention of James Franco – who was included on Heard’s witness list but never called to testify – and even a steamy kissing session.

Will you be seeking it out or joining us at Euronews Culture in bemoaning that we’re still being fed the story of two narcissistic celebs and their toxic relationship, as well as deploring the fact that domestic violence is once again being monetized after a messy real-life narrative that offered no life lessons other than social media hysteria does not rhyme with nuance?

"Hot Take: The Depp/Heard Trial has 'Hot Take' in the title for a reason," Adam Lewinson, Tubi's chief content officer, said in a statement. "With our partners at MarVista, this Tubi Original was fast-tracked into production to capture a timely take on a story that became part of the cultural zeitgeist, painting a unique picture of what millions watched play out in the headlines over the summer."

That's one way of looking at it.

Following a six-week trial that was streamed live and ended on 1 June, a seven-person jury concluded that Heard intentionally and maliciously defamed Depp when she wrote a 2018 Washington Post op-ed identifying herself as a public figure representing domestic abuse. Depp was awarded $10 million in compensatory damages.

Heard's team filed to appeal the verdict in July after a motion for a mistrial was denied.

"We believe the court made errors that prevented a just and fair verdict consistent with the First Amendment," a spokesperson for Heard said. "We are therefore appealing the verdict.”

As if the world hadn’t collectively had enough of this airing of dirty laundry - which was broadcast live, thereby effectively making Hot Take: The Depp/Heard Trial a remake - a two-part documentary titled Johnny vs Amber: The US Trial has been released this month on Discovery+.

The documentary features interviews with Depp’s lawyers, legal experts and journalists, along with behind-the-scenes footage and the promise of a “forensic account of the key evidence from both sides.”

The first episode investigates Depp’s side of events and presents “an alternative version of events that show Johnny to be a victim of domestic abuse himself”, while the second episode details Heard’s account, including “her detailed description of alleged sexual assault told on camera for the first time” and how “advocates of Depp mercilessly attacked her via social media,” according to a press release.

The question remains: Have we not suffered enough by having been subjected to endless coverage during the media circus / trial itself?

Between this documentary, the previous one titled Johnny vs Amber from 2021, and Hot Take: The Depp/Heard Trial, maybe it’s time to give the sensationalized celebrity scandal genre and its distasteful leanings a rest for a while.

Or maybe you’ve already finished House of Hammer and come to terms with the fact that these serialized trials and their aftermaths bring out the worst in their audience. In which case, you’re one up on us.

Johnny vs Amber: The US Trial is currently out on Discovery+ and the Tubi Original Hot Take: The Depp/Heard Trial is released today, Friday 30 September. Neither reps for Heard and Depp have yet responded for a comment on the film.