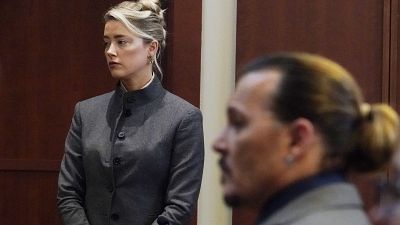 Millions of people are following the trial, with TikTokers and Twitter users dissecting every moment of the court's livestream.   -   Copyright  STEVE HELBER/AFP
By Giulia Carbonaro  •  Updated: 20/05/2022

The Johnny Depp-Amber Heard defamation trial is probably one of the ugliest ever civil trials involving two celebrities broadcasted to the public.

The case was brought by Depp against his ex-wife Heard over an article she wrote in 2018, implying he abused her.

What’s being contested in court is already messy and problematic: the two have reciprocally accused each other of domestic violence.

What’s more, the trial is being followed by millions of people around the world, who have taken to social media to dissect every moment, word and facial expression from Depp, Heard and their lawyers.

Most people posting actively on social media about the trial appear to be siding with Depp, with comments mocking Heard and calling her a liar, with hundreds of thousands of uses of the hashtag #AmberHeardlsApsychopath and others like #JusticeForJohnnyDepp.

Some followers of the trial have gone as far as recreating the accounts of domestic abuse, in order to prove or disprove them, while some have created makeup tutorials to discuss Heard's bruises. Others have even written a “theme song” for the trial.

Whoever you believe on the stand, domestic abuse organisations and activists are worried that the trial could be extremely damaging to the way we talk about abuse.

‘Hysterical women’ and ‘gold diggers’: The toxic discourse around the trial

“The streaming of the defamation trial brought by Depp against Heard has fuelled media commentary and public speculation on a situation that is deeply troubling and triggering for survivors of domestic abuse,” a spokeswoman from Solace Women’s Aid, a UK charity helping to end violence against women and girls, tells Euronews.

“Whatever the facts are, we have seen language and allegations used against Amber Heard that are common when abusers turn on survivors to undermine their credibility and paint them as the perpetrator, using sexist tropes about ‘hysterical’ women and ‘gold-diggers’.”

Heard has been made into something of a meme on social media, especially on TikTok, with users mocking and mimicking her behaviour in the trial, accusing her of "overacting" while giving testimony on the stand.

In one TikTok trend, users re-enact testimony from the trial. A particularly shared clip on the platform depicted a cat wearing a blond wig being lightly 'slapped' before cutting to the same cat dressed as a pirate and a voiceover quoting Heard's courtroom accusation of being hit by Depp. The video was viewed more than 13.5 million times before being removed, according to Rolling Stone

Other re-enactments are also available on the platform, featuring men pretending to slap women in the face as the audio of Heard's testimony plays in the background.

According to Solace Women’s Aid, there are many important elements not being taken into account by social media users that can impact the perceived reaction or behaviour of victims, things such as "the power dynamics at play, the perceived and actual risks to individuals’ safety, the survival mechanisms employed by survivors.”

“The delight taken in daily updates and the details revealed in court in many media reports and social media speculation reflects none of that expertise,” says the charity’s spokesperson. She’s concerned that the way Heard is being publicly attacked and mocked on social media will scare victims of domestic abuse off talking about what they’ve been through.

“Many women don’t speak up about domestic abuse through fear; fear of reprisal, negative backlash and their private lives being placed on display and judged. This public trial will be reinforcing that fear,” the spokesperson added.

During the trial, Depp himself asked the court, “If she was scared to death, why didn’t she leave?” a question which has become a common trope against abuse victims:

“There is a very real risk that survivors will be re-traumatised by the headlines and content they are seeing, or that they will feel apprehensive seeking support,” says Ruth Davison, CEO of Refuge, a London-based charity supporting domestic violence survivors.

“Scrolling on Tik Tok or Instagram, you can see horrific memes and reels where alleged assaults are being recreated as part of a ‘funny’ trend – abuse is never a joke, and these videos perpetuate harmful ideas and myths about abuse, how it manifests and how a victim might present.”

“When large numbers of people are seeking to discredit or mock a woman talking about her experience of alleged abuse so publicly, concerns survivors may have about not being believed will be amplified. Survivors should never be silenced,” Davison tells Euronews.

Whatever the outcome of the trial, Davison believes more should be done to show abuse survivors they’re taken seriously and that perpetrators’ actions will have consequences, “no matter the wealth or power they have behind them,” she adds.