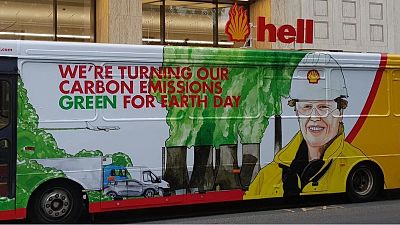 As we chat, Darren Cullen sips from an oversized mug emblazoned with the phrase “Not Piss”.

Cullen is better known as the satirical artist “Spelling Mistakes Cost Lives”. He’s just returned from the Glastonbury Festival of Performing Arts where he brought an exhibition and sold many of his “Not Piss” mugs.

The pint sized mug is a satire of similar mugs sold by Sports Direct, a high street sportswear shop in the UK. An interested customer at Glastonbury told Cullen how he’d lived for a while in a caravan and actually used a Sports Direct mug to wee in.

“He said he was buying my mug to differentiate which one actually had his piss in it,” Cullen tells. “It’s like I made it specifically for his life.”

The main event Cullen brought to Glastonbury was his “Hell Bus”. Cullen has converted an entire bus for the project in a satire of greenwashing attempts by oil companies.

On the bus is a modified version of Shell’s brand with the “S” missing and flames bursting out of the logo. On the side of the bus is the phrase “we’re turning our carbon emissions green for earth day.”

Inside is a selection of satirical posters that detail the ways Shell and other big oil companies have employed a marketing strategy that focuses on their renewable efforts, while arguably continuing to pollute the planet with the majority of their actual investments.

The bus is incredibly informative about Shell’s greenwashing strategies. But it’s also very funny, which is why it goes down a storm at the music festival.

The bus was originally an idea for Cop26 and is a culmination of many of the techniques Cullen has worked on for more than a decade as Spelling Mistakes Cost Lives.

I fought the law and I won

His brazen political satires of corporate hypocrisy have mostly been taken with good humour, but they have got him into trouble before.

Lawyers from Shell once sent him a cease & desist letter for using their trademarks, demanding he stop selling products with their brands within seven days.

Cullen checked with an intellectual property lawyer friend who said although they can’t stop him making the art, they could stop him from selling the merchandise.

He accepted their demands to stop selling the merchandise in seven days, but did it in a style that suited him.

First, he started a fire-sale to try and get as much cash from the “Hell” merchandise as possible in the remaining week. Then he sent Shell an email.

“I was hoping you could first clarify a couple of points regarding the trademark claim,” he wrote.

“Does SHELL consider HELL to be their trademark? If they do not currently trade under this name, are they considering rebranding as HELL in the near future?”

Shell’s lawyers replied that trademark law does not just cover identical signs, but signs that could be confused with their brand.

“So I wrote back to that saying I can see how Shell could be confused as Hell because they were creating a burning world unfit for human habitation,” Cullen says.

He then posted screenshots of all the emails online where they started to go viral.

“Someone further up the chain at Shell saw it and was like, ‘stop giving this guy oxygen, this is even giving them more like material’. So they just stopped replying. And since that, I guess I won through sarcasm, not even because of valid legal defence.”

At one point a lady asked him to take a picture of her with the bus at Glastonbury. It turned out she worked for Shell.

She asked Cullen if he really thought Shell was perpetuating greenwashing.

“I was like, ‘yeah, definitely’,” he says before bringing up the way Shell damaged the Niger Delta through oil spills.

“She just laughed and said ‘oh, we’re dumping the equivalent of a tanker of oil directly into the sea every day’. I said ‘you shouldn’t be telling me that!’” he laughs.

Does Cullen think he changed the Shell employees mind? Maybe. But Cullen recognises that changing people’s minds on politics is a complex and long-term game.

Birth of a new mindset

Now nearly 40, Cullen wasn’t always the left-wing political artist he is today. Born in Leeds to Irish immigrants, when he went to university to study advertising he harboured right-wing British nationalist beliefs.

He’d chosen advertising as it was a good way to stay creative while respecting his parents’ fears about employability. There he learned all about the ways adverts manipulate language and use slogans to sell things.

He then went to Glasgow to study fine art. It was there that he started shifting his opinions from a right-wing nationalist interested in advertising to the person he is today.

Discovering Noam Chomsky’s documentary “Manufacturing Consent” was a breakthrough moment for him. The book and documentary deals with the propaganda model of mass-communication business.

“You can't argue that that's not how it works,” Cullen says. And then I thought ‘what do I want to do?’ Do I want to perpetuate that?”

Equally important were his accepting and non-judgemental friends.

“I would get into debates or arguments with my more left-leaning friends from our art school. I had the space to change my mind.”

“When I started discarding some of my previous positions on things, whether it was on the British state, or whether it was on advertising or capitalism or whatever,” he says. “I didn't have anyone going, ‘Oh, hold on a minute. But last week, you said this or that’.”

“I was quite lucky that I was in an open minded, politically progressive institution, and surrounded by people with good politics and who brought me along with them,” he says.

After art school, he created some of the first pieces associated with Spelling Mistakes Cost Lives.

The first was a billboard in 2005 which he replaced with a poster that read “Santa gives more to rich kids than poor kids” and “stop lying to your children about Santa Claus”.

In 2005 I designed a billboard as part of my degree show but it was cancelled after The Sun contacted the billboard co. & then published a story about how they stopped me getting my evil message into the world by *checks notes* printing it across half page of a national newspaper pic.twitter.com/WK3vaKGLhN

After that, Cullen spent a few years focusing on being the drummer in new-rave band Shitdisco. After the band’s breakup in 2009, he threw himself into Spelling Mistakes Cost Lives.

A career in anti-advertising

Cullen knows what it’s like to change his mind. Having gone from being a British nationalist who believed in conspiracy theories, he believes strongly in the power of changing people’s minds through humour.

“If you can make someone laugh with you about the absurdity of something, then they're already agreed with you on that point, right?” he says.

I think about this stuff as anti-advertising, or anti-propaganda.

“We’re up against all the delights of consumer capitalism out there which is just a world of pleasure,” Cullen says. They’re the most sophisticated propaganda techniques ever developed and then if our message on the left is very dour, we’re going to lose people.”

“I think about this stuff as anti-advertising, or anti-propaganda.”

Just before Glastonbury, Cullen took his anti-advertising work to Berlin for an exhibition on subvertising.

For the exhibition he brought a diorama of a modified tabletop football board. On it, he depicted Palestinian footballers being harrassed and attacked by IDF soldiers. It was inspired by an incident in 2014 where IDF soldiers shot two under 20 players from Palestine.

At the exhibition, the means for tackling advertising propaganda were discussed in seminars, including techniques like how to unlock a bus stop frame to replace the advert with your own artwork.

Making a mark with art

“One of my favourite things is that it’s never been gatekept. It’s always been someone doing it and if you want to do it too, they’re happy to show you. It’s about democratising these spaces,” he says.

When he stops to consider the impact his works have had, one particular piece comes to the forefront. In “Action Man: Battlefield Casualties”, Cullen made three short films that depict the popular toy Action Man dealing with PTSD, losing benefits and dying young.

The films were made with the charity Veterans for Peace UK and aimed to critique the British Army’s recruitment strategies aimed at under 18s.

“I think that project is one of my favourites,” Cullen says.

“Because it was also made with soldiers and veterans, it short circuited that immediate response of, ‘you bloody hippies’.”

With famous comedian Matt Berry also lending his voice to the adverts, it gained traction quickly.

“I saw in the comments, mostly from American soldiers, that they didn’t know they had PTSD until they watched this stupid Action Man comedy piece.”

“That’s one of the times I’ve had a really direct effect and known that something has really helped somebody,” Cullen says.

You can see Cullen’s work as Spelling Mistakes Cost Lives on his website, Instagram or at his Museum of Neoliberalism in south London.