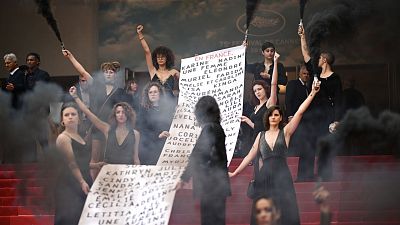 For the second time this year, a protest occurred at the Cannes Film Festival highlighting violence towards women   -   Copyright  AFP
By Theo Farrant  •  Updated: 23/05/2022

On Sunday 22 May, a group of protestors dress in black invaded the Cannes Film Festival carrying a large banner with the names of 129 women who were killed in France since the previous festival in 2021.

The protestors, who were members of a feminist collective known as "Les colleuses", also deployed black smoke bombs when paused on the steps of the red carpet in front of the Palais des Festivals.

The demonstrations took place at the premier of the film Holy Spider, a crime thriller directed by Ali Abbasi, which tells the story of a female journalist investigating the ongoing killings of sex workers in Iran.

The film is based on the real life serial killer Saeed Hanaei, who confessed to killing 16 women between 2000 and 2001. His murders became known as the 'spider killings' and he was sentenced to death on 8 April 2002.

It's the second time at this year's 75th Cannes Film Festival that the red carpet has been invaded by a protest surrounding violence towards women.

On Friday (20 May), a woman with the Ukrainian flag and the words "stop raping us" painted on her bare chest, and wearing red-smeared underwear, burst onto the red carpet of the premiere of "Three thousand years of longing".

She was protesting the reports of rape committed against women by Russian forces in Ukraine.