Gutted fish spill plastic bottle tops from their stomachs. Turtles pounce on plastic film floating in the water, mistaking it for jellyfish. Seabirds spend days scouring oceans for food for their young – and bring back plastic instead.

A UN environmental summit in Nairobi has brought to the surface new horror stories of the impact of plastic in oceans around the world.

“Armageddon in the making” is the head of the UN Environment Agency’s description for the problem of marine pollution.

Erik Solheim has warned that if things continue at the same rate, the weight of plastic in the sea will rival that of fish by 2050 – possibly referring to research by the Ellen MacArthur Foundation which reached a similar conclusion.

“Given the grim statistics on how we are poisoning ourselves and our planet, bold decisions from the UN Environment Assembly are critical, he told the summit. “That is as true for threats like pollution as it is for climate change and the many other environmental threats we face.” 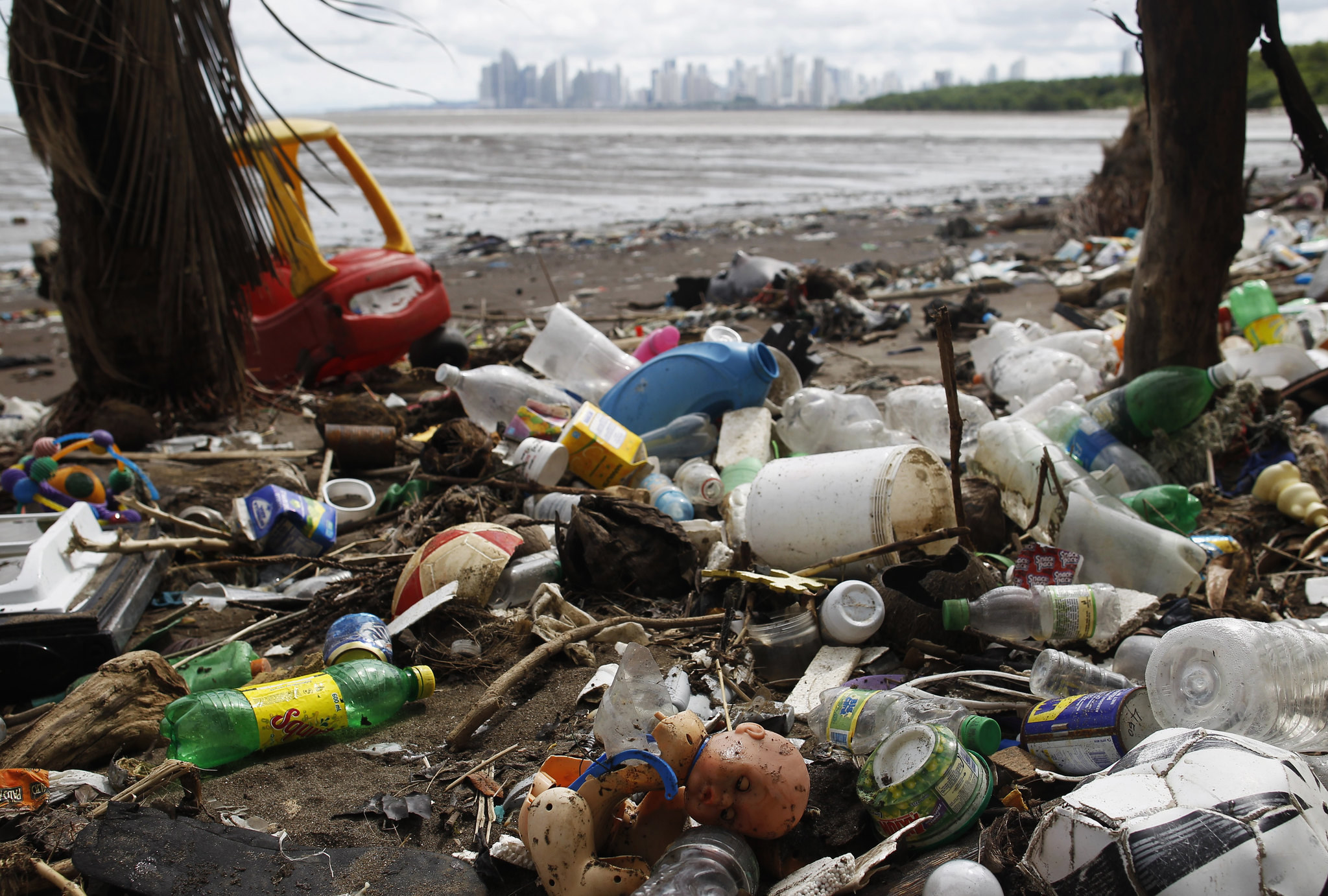 Plastic bottles and other rubbish on a beach in Panama City, September 2013

From the Arctic to the Antarctic: plastic’s devastating reach

“It’s all over the place, even in northern Norway, hundreds of miles from human habitation,” Solheim said.

A BBC documentary team found evidence of the damage plastic is doing to the albatross population in the South Atlantic. Birds searching the ocean for fish to feed their young brought back plastic instead. One chick was killed by a plastic toothpick it had swallowed.

In Costa Rica the Romelia National Wildlife Refuge published a video on Facebook showing numerous plastic items, including whole bottle caps, being removed from the stomach of a dead fish.

Scientists say the fish often mistake the plastic debris for food and swallow it. “The plastic does not melt and can block their intestinal tract, preventing them from consuming food and leading to death by starving,” Erick Ross of the MarViva Foundation told the Costa Rican website crhoy.com.

Experts have warned that the plastic is finding its way into the human food chain. The European Food Safety Authority called last year for urgent research in the face of health and food safety concerns.

Earlier this year the remote, uninhabited Henderson Island in the South Pacific was described as the world’s most polluted island when a scientific study found it had nearly 40 million pieces of plastic, many washed up from South America thousands of kilometres away.

An “on-the-go” culture, increasingly prevalent in Asian countries, is being blamed for much of the damage.

Research from 2015 found that more than half of the plastic polluting oceans originated from five countries: China, Indonesia, the Philippines, Vietnam and Sri Lanka.

Estimates from a Euromonitor International report have suggested that the number of plastic drinking bottles sold each year worldwide could rise by over a fifth in five years, from more than 480 billion in 2016, to over 580 billion in 2021. 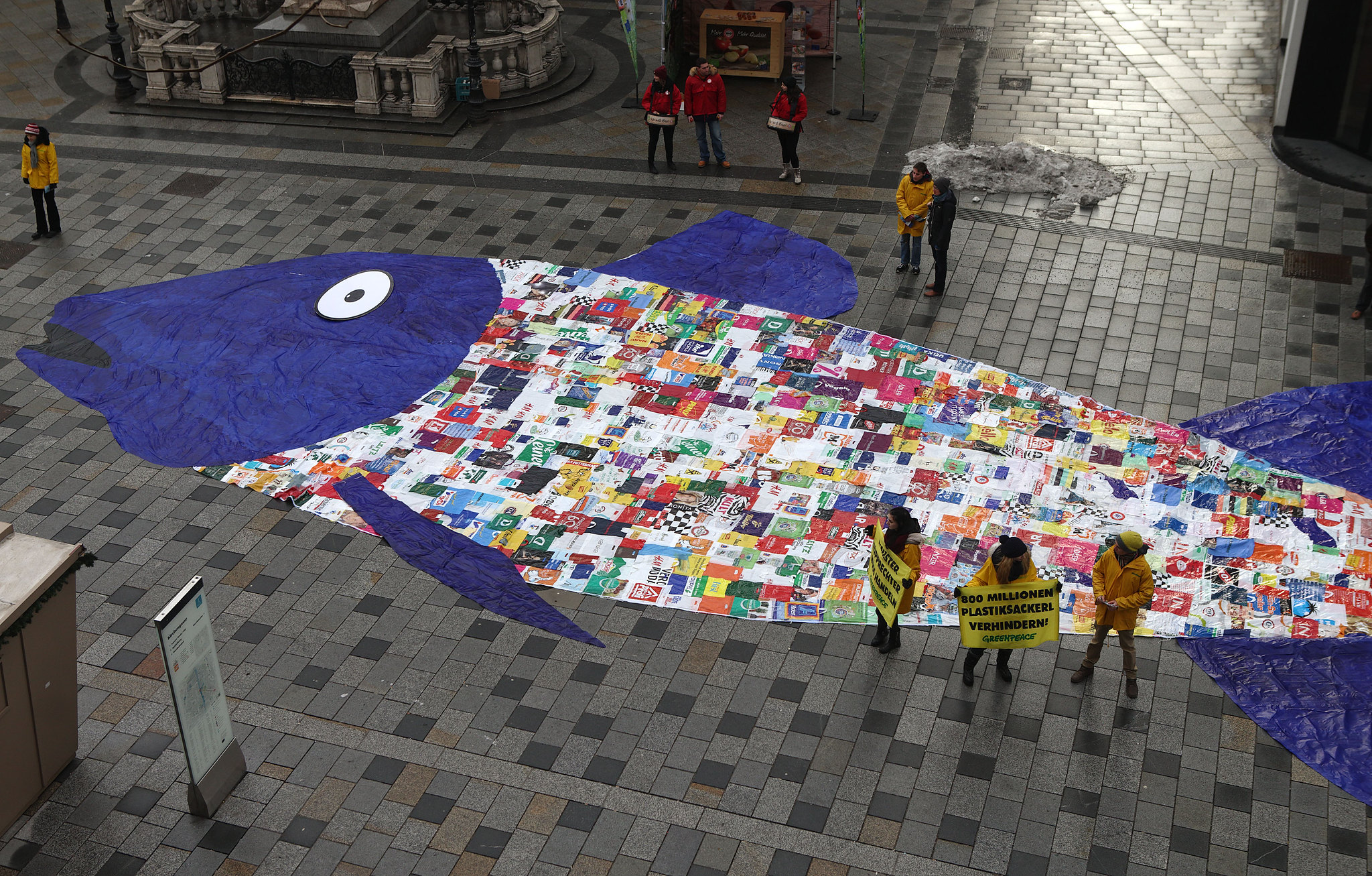 Plastic shopping bags form the shape of a fish in a Greenpeace protest in Vienna, January 2015.

Tackling plastic pollution: the path ahead

The UN summit, which runs until December 6, is aimed at tackling pollution in all its forms – including air, land, freshwater, marine, chemical and waste. Two UN organisations signed a pact on Monday to increase cooperation and boost private finance and investment to achieve the 2015 Paris Climate Agreement goals.

The US is withdrawing from several UN organisations and projects including the Paris accord, but is present at the summit. The US Environmental Protection Agency has highlighted widespread ocean pollution from multiple sources “following decades of uncontrolled dumping”.

Ocean pollution is getting increasing attention, not least because it affects many countries. Earlier this year a UN programme launched the #CleanSeas campaign calling on industry and consumers to change habits before the damage in the oceans becomes irreversible.

Several governments and businesses are starting to act but experts say global, co-ordinated action is needed.

Erik Solheim says there are straightforward solutions including natural alternatives to plastic, singling out plastic food wrapping, straws and coffee cups for criticism, describing the situation as “an environmental disaster caused by laziness that is easily fixed by a healthy dose of innovation and political will”.