Whether or not you agree with his politics, you can’t argue that Donald Trump draws in crowds. His distinctive gestures and expressive body language captivate and disturb in nearly equal measure. We got in touch with communication experts to find out what they make of his style.

Critics may find his style exaggerated and caricatural but according to Prof. Geoff Beattie, author of Rethinking Body Language, it’s also one of his attractive features: “Politicians want to come across as open, honest and authentic, if you have a facial expression that reveals your emotional response people understand that you believe in what you’re saying, no matter how outlandish it is.”

“A lot of politicians spend so much of their time in interviews and debates masking their expressions, usually with a smile”, Prof. Beattie explains. “That makes us uncomfortable because we know there is a degree of hiding going on… We might not be aware of that consciously, because a lot of non-verbal communication is processed unconsciously, but nevertheless we feel a degree of discomfort about it.” 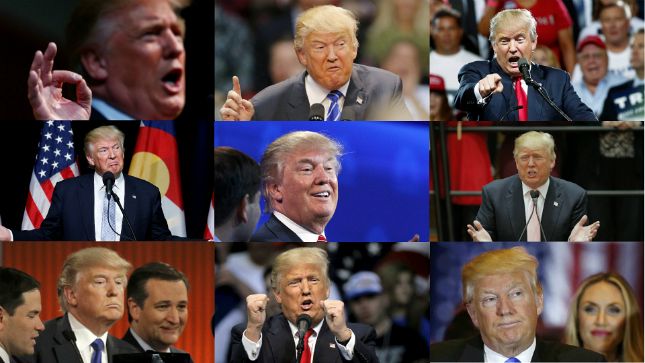 Several people have tried to research Trump’s micro-expressions, looking for discrepancies between his words and body language but they haven’t been able to find any – meaning Trump really believes what he’s saying. Last year one expert told UK newspaper The Independent: “Out of the seven channels of communication that I observed, he was consistent in all – therefore I conclude he was making statements that appeared to be consistent with his belief system.”

- Geoff Beattie is a professor of Psychology at Edge Hill University, he is also an acclaimed author and broadcaster and he has published over 20 books including the recently released title Rethinking Body Language

- Alan Stevens is a communication expert from mediacoach.co.uk

However, just because Trump’s gestures mirror his beliefs, it doesn’t mean he isn’t aware of their value. In one expert analysis on the BBC it was claimed Trump had not been coached in his body language, Prof. Beattie disagrees: “I don’t believe he hasn’t been heavily coached in the past… Trump has very distinctive body language, some of his gestural movements are very unusual and the notion that they haven’t somehow been coached into him, I certainly don’t agree with that. He’s got them down to a fine art.”

It isn’t just Trump’s gestures and expressions that set him apart from other presidential candidates. Communication expert Alan Stevens told Euronews that Trump’s on-stage presence is also significant: “While previous presidents like Bill Clinton and Barack Obama often stepped away from the lectern to engage with the crowd, Mr Trump stays in place, and uses upper-body gestures and expressions to make his point. This conveys a sense of power and control rather than a more collaborative approach.”

And according to our experts, using regular, powerful gestures can do more than convince a crowd of your authenticity. In fact, Prof. Beattie’s research shows that if people listen to speeches with a lot of gestures they are more likely to remember what you say. In psychology it’s known as dual encoding, in other words receiving a message through both a verbal and visual channel simultaneously means it is more likely to stick.

Donald Trump’s hand gestures and what they mean

This is probably Trump’s most well-recgonised gesture – the OK pinch between the thumb and forefinger. This tight gesture is Trump’s go-to move which, according to our experts, helps him show precision and control.

Prof Beattie:“These batonic movements are stressing those bits of the message that he sees as important and we like politicians that do that. In some sense it’s showing commitment to what he’s saying but what he’s also doing is adding an extra layer of subconscious meaning.”

Alan Stevens:“He also makes use of random hand-waving to indicate that things have gone badly wrong before returning to close tight gestures to show that he can be trusted to deliver a solution.”

Every so often Trump’s prominent OK gesture pairs up with an alternating upward pointing L finger.

Prof Beattie:“Some people think he uses them interchangeably. I don’t think that’s the case. If you look at some of the structures he’s doing, he will use the precision gesture as a counterpoint to the pointing upwards one to accentuate the third part of the list. And that pointing upwards is a very unusual gesture. I’ve analysed politicians in the past and I can’t think of many who use it.”

Alan Stevens:“The closed loop and the L gesture both indicate ‘I’ve got this exactly right’. They suggest precision (the finger pointing upwards in the L) and a job done properly (the OK gesture). Both, and especially the latter, will be commonly used by his core supporters, creating another connection with them.”

Many politicians, such as Obama with his fist/thumb gesture, try to find a less agressive replacement for the classic finger point – but not Trump. 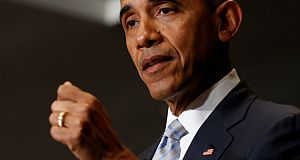 Alan Stevens:The point is normally avoided by speakers, since it can be seen as accusatory. However, Donald Trump, as the former host of “The Apprentice” has made the gesture his own, and uses it as a reminder that as president, he will have the control to “fire” people.”

Trump has several kinds of open palm gestures. This one is typically seen as an openness gesture.

Prof Beattie:“The open palm is ‘look I’m an honest Joe’ but there are lots of examples of it when he’s talking about negative things happening. He’s saying ‘look, you the audience and I, we are in exactly the same boat.’ And he doesn’t do that verbally he does that non-verbally… Some critics of Trump rightly point out that he talks about himself quite a lot. And people have talked about his very high level of narcissism… But what is interesting, sometimes when he does that, he doesn’t contradict it – he compensates for it – by using these gestures to build a ‘we’ connection with the audience. He’s showing that his emotions and their emotions are aligned. So even though he’s talking about himself he’s still building that rapport, building those connections with his audience.”

Alan Stevens:“Mr Trump uses the “stay back” gesture with both hands close together and pushing at an imaginary wall. There’s a reminder of two of his main policies right there – the wall on the Mexican border, and the proposed ban on Muslim visitors.”

Prof Beattie:“It’s fascinating when he puts his palms up… What he’s trying to do is show this immediate reaction to some of the threats the US is facing. Again you can see people think he is fully committed.”