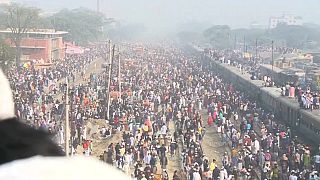 Thousands of Muslims gather in Bangladesh for religious gathering

Watch: Thousands of Muslims gather in the Bangladesh for annual religious gathering

Bangladesh is hosting the 56th edition of the annual religious gathering of Bishwa Ijtema.

Bangladesh is hosting the 56th edition of the annual religious gathering of Bishwa Ijtema.

The event takes place in the town of Tongi, by the banks of the River Turag, after two years of hiatus due to the Covid-19 Pandemic.

Hundreds of thousands of Sunni Muslim devotees gathered to pray in the world's second largest congregation of Muslims after the Hajj in Mecca, South Arabia.

The first phase of the three-day Bishwa Ijtema took place between January the 13th until the 15th.

The second phase will be held from the 20th until the 22nd of January.

Watch video in player above.