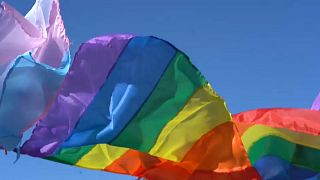 The crowds gathered before noon in Plaza de Mayo, the square facing the presidential palace, and marched 2 kilometres towards the Congress building.

This year's parade's motto is "The debt is owed to us," comparing Argentina's substantial financial debt to the social and legal dues the LGBTQ community argues are owed to them.

Trans women are particularly vulnerable in Argentina, where they are the main target of hate crimes motivated by sexual discrimination or gender identity.

Argentina was the first country in Latin America to recognise non-binary gender identity through an official identification card.

Since 2012 the country also respects by law the self-perception of gender.