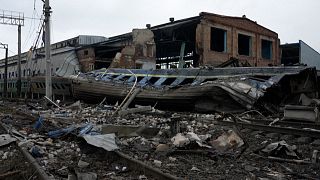 Russia fired a salvo of missiles at Ukraine's second-largest city, Kharkiv, overnight, officials said on Wednesday, hitting a railway yard and knocking out power to more than 18,000 homes.

The Kharkiv regional emergency service said the explosions, which were audible in the city centre at around 9pm (1800 GMT) on Tuesday, destroyed an electricity transformer and hit a workshop.