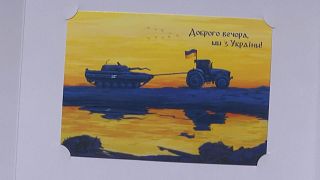 Ukrainian tractor driver Vitaliy Denysenko grins as he pulls a 1970s Russian MT-LB tank around a field in the Kharkiv region, where it was left during the hasty Russian withdrawal at the end of March 2022. Footage of Russian tanks and other military vehicles being towed away by plucky Ukrainian tractors has appeared regularly on social media since Moscow's February 24 invasion of Ukraine and quickly became a defining image of the country's resistance. Ukraine's postal service has now launched a new stamp celebrating the infamous heists.