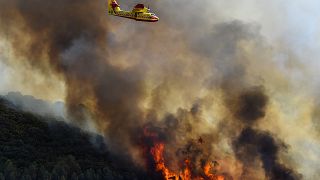 Hundreds of firefighters battle wildfires in France and Czech Republic

Images of a forest fire in southern France, where nearly 500 firefighters are deployed to contain the new wildfire. Civil security Canadair aircraft work to extinguish the fire while a large plume of smoke is visible from the surrounding area.

Firefighters from several countries have joined forces to battle a fire in a national park in the northern Czech Republic that has spread to the state of Saxony in neighbouring Germany.