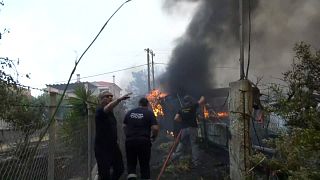 Authorities on Saturday (23 July) ordered the evacuation of the popular resort of Vatera on the eastern Aegean island of Lesbos due to a forest fire threatening the first houses in the village.

The fire started on the morning of 23 July and is considered a difficult blaze as it is burning on two fronts, one heading towards the village of Vrisa and the second towards Vatera, a popular tourist destination, an 8-kilometre long sandy beach in the southern part of Lesvos island.

In addition to the fire-fighting forces on the ground, three water-dropping aircraft based in Lesbos are working to bring the fire under control, with reinforcements expected to arrive from northern Greece.