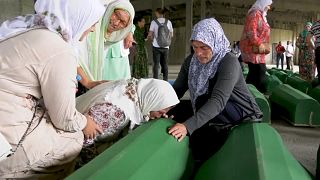 Fifty bodies of Bosnians killed in the Srebrenica genocide in 1995 arrived at the Potocari memorial centre where they will be finally laid to rest on the 27th anniversary of the Europe's worst massacre since the World War II.

Fifty bodies of Bosnians killed in the Srebrenica genocide in 1995 arrived at the Potocari memorial centre where they will be finally laid to rest on the 27th anniversary of the Europe's worst massacre since the World War II.

Families and friends of the victims gathered to lay the coffins in the hall outside the cemetery on Friday ahead of Monday's funeral.

Close relatives were seen crying and praying next to the coffins.

Most of the 50 victims' bodies were incomplete, with investigators using DNA analysis to identify them after being found scattered in several mass graves around Srebrenica.

Both sons of Idriz Mustafic, a 69-year-old from Srebrenica, were killed by Serb troops in July of 1995, and both bodies were found in mass graves years later, though with several body parts and bones missing.

The Srebrenica killings were the bloody crescendo of the war in Bosnia, which came after the breakup of Yugoslavia unleashed nationalistic passions and territorial ambitions that set Bosnian Serbs against the country's two other main ethnic factions — Croats and Bosniaks.

The massacre has been declared a genocide by international and national courts, but Serb leaders in Bosnia and neighbouring Serbia continue to downplay or even deny it despite the irrefutable evidence of what happened.