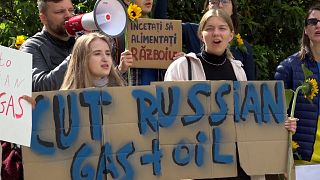 Demonstration outside the EU summit in support of Ukraine

Ukrainian activists held a demonstration in Brussels ahead of Monday's EU summit to call for tougher sanctions against Russia.

The protesters point out that European Union officials had promised full sanctions on Russian oil and gas by the beginning of June, but so far, at the end of May, there has been no oil embargo.

The EU has already imposed five sets of sanctions on Russia over its war in Ukraine. The EU has targeted more than 1,000 people, including Russian President Vladimir Putin and senior government officials, as well as pro-Kremlin oligarchs, banks, the coal industry and others.