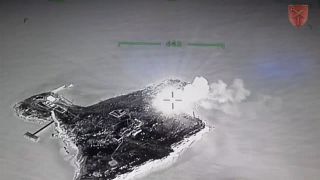 The video was released by the Operational Command South of the Armed Forces of Ukraine.

The helicopter had flown to the island possibly to aid troops wounded in attacks the day before.

The video corresponds to satellite photos analyzed by The Associated Press showing Ukraine targeting the island in a bid to impede Russia's efforts to control the Black Sea.