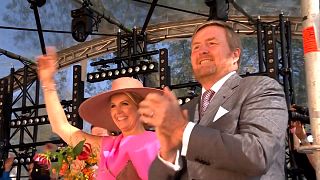 The Dutch royal family is in Maastricht, in the southern province of Limburg. The royal family is making its way through the city on a very sunny Wednesday. They arrived by bus at the Sint Servaasbrug.

The king greeted people along the route. He is accompanied by, among others, Queen Máxima, his daughters, Princess Laurentien, Prince Constantijn and Prince Bernhard Jr.

A little later the royals were treated to a performance by DJ’s Lucas and Steve and a dance group. Another dance group dressed in the Ukrainian colours yellow and blue joined the celebrations.