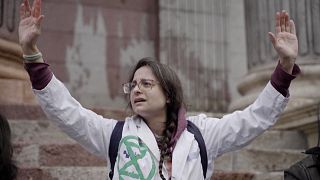 Activists from Scientific Rebellion, the scientific arm of Extinction Rebellion, splashed red paint on the staircase and columns of the Spanish parliament on Wednesday as part of an action to draw attention to their demand for government action on climate change.

Between 4 and 9 April, Scientific Rebellion is organising a civil disobedience campaign to coincide with the publication of the third part of one of the world's most crucial climate reports, the IPCC.

The paint was biodegradable and was easily removed from the front of the Parliament.