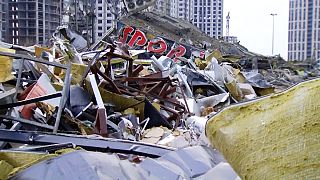 War in Ukraine: Retroville, in the heart of the bombed shopping centre

Aisles lined with broken glass, gutted mannequins, desolated toy shops and mere rests of sporting goods stores: welcome to the exploration of the gaping hole of the Kyiv shopping centre.

On Sunday, March 20, what used to be one of Kyiv's symbols of leisure, entertainment and paradisiac place for shopping turned into a massive pile of debris, wrecked vehicles and twisted ironwork littering hundreds of metres.

At least eight people were killed on Sunday night after the shelling of the Retroville shopping centre in northwestern Kyiv.

Journalists from the news channel Antenna 3 Romania entered the bombed shopping mall on Thursday, March 30, and shared footage of the now huge field of rubble overlooked by a devastated building that threatens to collapse.

Soldiers leading the clean-up of the rubble are still looking for four bodies, according to the French newspaper L'Obs. Thirteen have already been found.