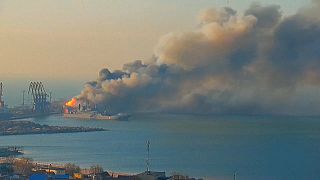 Plumes of black smoke billow from a large grey vessel docked next to big cranes following what the Ukrainian navy says was a strike on the ship.

Ukraine’s navy said the Russian Alligator-class landing ship Orsk was destroyed at the port in the Azov Sea near the besieged port city of Mariupol.

The Orsk, from the Black Sea Fleet, docked at Berdyansk on March 21.

The Russian military said it would be used for “delivery of cargo and military equipment” to Russian forces.