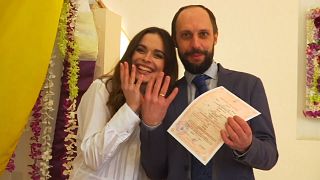 Love triumphed over war Friday for a Ukrainian couple in the capital Kyiv.

Dmytro Shybalov and Anna Panasiuk set aside their worries over Russia's invasion and got married at the city's civil registration office.

They met seven years ago in Donetsk, in the middle of the conflict between Russia-backed separatists and Ukrainian government forces.

They planned to marry during the summer but brought their plans forward, believing they wouldn't get a better opportunity later.

The newly-married couple works as volunteers for civil organizations and plan to stay in Kyiv despite Russia's advance towards the capital.