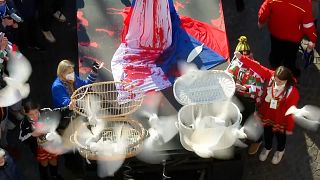 Protests against the war in Ukraine around the world

Protests against the war in Ukraine around the world

Australia has said it will provide lethal military equipment to Ukraine to help the Ukrainians resist the Russian invasion.

Several dozen Israelis staged a demonstration in support of Ukraine outside the country's parliament, the Knesset, on Monday.

Participants waved Ukrainian flags, held signs that read "No War," and called on the Israeli government to take action in support of Ukraine, including providing it with the Iron Dome missile defence system.

In the Philippines, dozens of people gathered in Manila on Monday in solidarity with the people of Ukraine, denouncing the invasion by Russian military forces.

Holding signs reading "Stop the war in Ukraine! We denounce all bully nations" the protesters chanted and held a candlelight vigil.

In Germany, tens of thousands of people have turned out for a protest against the Russian attack on Ukraine that was held in place of Cologne's annual carnival procession.

The annual "Rose Monday" parade, a highlight of Germany's carnival season, had been cancelled in Cologne because of the coronavirus pandemic. It was replaced by a peace protest after the war started last week.

Some participants still wore carnival costumes, including in Ukraine's colors of blue and yellow.

The demonstration was led by a float depicting a dove impaled on a Russian flag.

The march went through the city centre past many of the persiflage wagons that were originally built for the carnival parade.