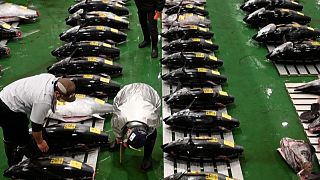 The new year's first tuna auction was held at the Toyosu fish market in Tokyo, early on Wednesday morning.

The top bid at the event was a bluefin tuna from Oma, Aomori prefecture, weighing in at 211 kilograms.

Japanese broadcaster NTV said sushi chain Ginza Onodera took home the tuna and plans to serve it at eight of their restaurants later on Wednesday.