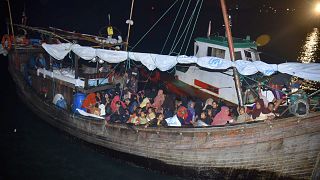 A group of 120 Rohingya Muslims disembarked from a boat that had drifted for days off Indonesia’s northernmost province of Aceh and was towed by a navy ship into port, officials said Friday.

A group of 120 Rohingya Muslims disembarked from a boat that had drifted for days off Indonesia’s northernmost province of Aceh and was towed by a navy ship into port, officials said Friday.

The refugees' wooden boat was reportedly leaking and had a damaged engine.

Efforts to rescue its passengers, who are overwhelmingly women and children, began after Indonesia's government on Wednesday said it would allow them to dock because conditions on the boat were so severe.

The broken-down boat was towed by a navy ship early Thursday from its location about 53 miles (85 kilometers) off the coast of Bireuen, a district in Aceh, toward Krueng Geukueh seaport in neighboring Lhokseumawe, a coastal town in the North Aceh district, said navy western fleet command spokesman Col. La Ode M. Holib.

High waves and bad weather hampered the rescue operation, and the navy ship was moving 5 knots (5.7 miles) per hour to keep the towed boat from capsizing, Holib said.

Authorities used buses to move the Rohingya refugees from the port to a nearby warehouse, providing temporary shelter amid heavy monsoon rains.

The refugees will all be tested for the coronavirus, Holib added.