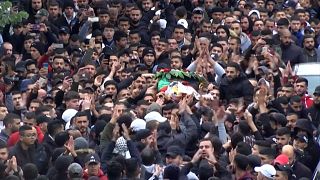 Funeral of Palestinian shot dead after firing at Israeli troops

A Palestinian man who reportedly fired on Israeli troops in the occupied West Bank Wednesday was shot dead by Israeli forces returning fire, the army and Palestinian health ministry said.

The Palestinian health ministry said Mohammed Issa Abbas, 26, died from gunshot wounds to the back after the vehicle he was in came under fire by Israeli forces in the al-Amari refugee camp in Ramallah.

Israel's army said in a statement that its forces entered the area "to search for suspects who were spotted approaching the community of Psagot."

Psagot is Jewish settler community in the West Bank.