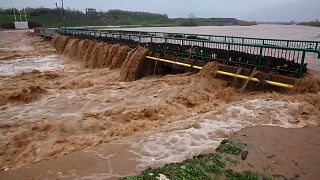 Homes and businesses were flooded around Sarajevo while local roads were submerged in the southwest of the country, forcing some schools to cancel classes.

Most parts of Sarajevo were left without electricity due to the flooding of one of the main substations on the outskirts of the city.

The power transmission company, Elektroprijenos, said the heavy rain was hindering attempts to get the power rerouted.

Dozens of people had to be evacuated from their homes in the Sarajevo suburb of Otes and in the city of Konjic, some 50 kilometers (30 miles) southwest of the capital.

Rain started late on Thursday and forecasts say it will continue to fall until Sunday, raising fears of a repeat of record flooding that affected about a third of the population in 2014.