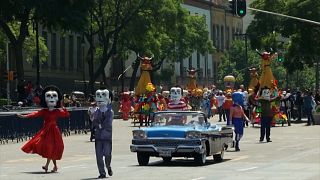 Massive Day of the Dead commemorations in Mexico

Mexico returned Sunday to mass commemorations of the Day of the Dead, after traditional visits to graveyards and massive public events were prohibited last year because of the coronavirus pandemic.

For most it was a joyful return to public activities like the Hollywood-style parade that Mexico City adopted to mimic a scene from the 2015 James Bond movie "Spectre."

Tens of thousands, most wearing masks despite the city's relatively high vaccination rate, gathered along the city's main boulevard Sunday to watch the parade of dancing skeletons, dancers and floats.

Mexico has long had a different attitude toward death, more social, more accepting than in many parts of the world.

According to Mexico City authorities some 300,000 people packed the city's iconic Avenida Reforma boulevard to enjoy the Day of the Dead parade.

Festivities will continue across October 31 to November 2.