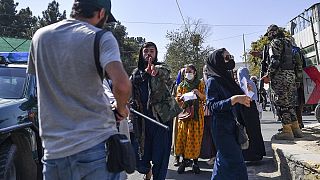 The Taliban beat up several journalists to prevent media coverage of a women's rights demonstration in Kabul on Thursday.

One foreign journalist was hit with a rifle butt by a Taliban fighter, who swore and kicked the photographer in the back while another punched him.

At least two other journalists were hit as they scattered, pursued by Taliban fighters wielding fists and throwing kicks.

The women held signs saying, "We have no right to study and work," and "Unemployment, poverty, hunger," as they walked with their arms in the air.

Since the Taliban's return to power, Afghans have held street protests across the country, sometimes with several hundred people and often with women at the forefront, which was unthinkable under the hardline Islamist group's last regime in the 1990s.