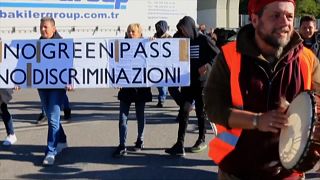 Protests erupted in Italy on Friday as a new anti-coronavirus measure went into effect requiring all workers, from magistrates to maids, to show a health pass to get into their place of employment.

Police were out in force, schools were closing early and embassies issued warnings of possible violence amid concerns that anti-vaccination demonstrations could turn violent, as they did in Rome over the weekend.

Protests by port workers in Trieste threatened to affect commercial activities, but early reports suggested the ports were operational.

Protesters shouted "We will never give up – No green-pass", and held large banners reading: "No green-pass, no discrimination"