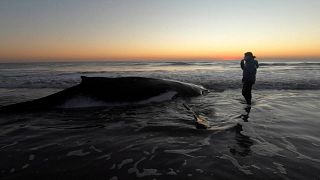 Argentina: Rescuers save a humpback whale stranded on a beach

Rescuers managed to save a humpback whale on Tuesday, October 5, after the massive animal washed up on the coast of Buenos Aires province, said the environmental foundation Mundo Marino (FMM).

The foundation was alerted to the stranding of the animal, an 8.5-meter long specimen weighing about seven tons, on Monday afternoon.

The rescuers, assisted by personnel from various government agencies, used harnesses and a heavy excavator to get the whale out to a depth where it could float. Once at that depth, the humpback whale "reacted quickly" and swam out to sea, according to FMM.

This operation is the second in 48 hours, as another humpback whale was rescued on Sunday after it washed up on a beach in the city of Nueva Atlantis.

According to FMM, there has been a "disturbing" trend of similar incidents in Argentina and Brazil in recent months.