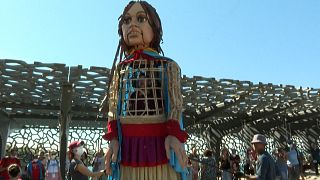 From the top of her 3.5-meter tall wooden figure, Amal, a puppet representing an uprooted Syrian child, landed like a rock star on the port of Marseille, one of the stops on a journey that began in Turkey and will end in November in the United Kingdom.

The large doll representing a Syrian girl in search of her mother landed on Wednesday on the esplanade of the Museum of Civilizations of Europe and the Mediterranean (Mucem), in an overexcited atmosphere and under the applause.

The puppet left Gaziantep, a Turkish city on the Syrian border, on July 27 and is due to reach Manchester in the United Kingdom on November 3, after having traveled 8,000 kilometers and crossed eight countries, where hundreds of cultural events are scheduled to welcome it.

This odyssey, called "The Walk", is intended to raise awareness in Europe about the plight of migrants, especially unaccompanied or separated children.