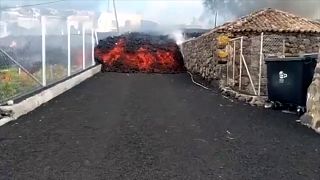 A surge of lava destroyed around 100 homes on Spain's Canary Islands a day after the volcano erupted, forcing 5,500 people to leave the area, local authorities said.

The Cumbre Vieja erupted on Sunday afternoon, sending vast plumes of thick black smoke into the sky and belching molten lava that oozed down the mountainside on the island of La Palma

According to the regional government, some 5,000 people had been evacuated from their homes following a week of seismic activity in the region. Cumbre Vieja is one of the most active volcanic regions on the island and its last eruption was in 1971.