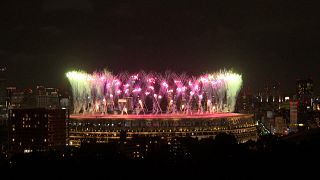 The final act of the delayed Tokyo Olympics and Paralympics came Sunday, almost eight years to the day after the Japanese capital was awarded the Games.

The Paralympics ended a 13-day run in a colorful, circus-like ceremony at the National Stadium overseen by Crown Prince Akishino, the brother of Emperor Naruhito. The Olympics closed almost a month ago.

These were unprecedented Olympics and Paralympics, postponed for a year and marked by footnotes and asterisks.

The closing ceremony was entitled "Harmonious Cacophony" and involved both able-bodied actors and others with disabilities. The theme was described by organizers as a "world inspired by the Paralympics, one where differences shine."

Like the Olympics, the Paralympics went ahead as Tokyo was under a state of emergency due to the pandemic. Like the Olympics, testing athletes frequently and isolating them in a bubble kept the virus largely at bay, though cases surged among a Japanese population that is now almost 50% fully vaccinated.

"I believe that we have reached the end of games without any major problems," said Seiko Hashimoto, the president of the Tokyo organizing committee.

The pandemic probably cost organizers almost $800 million in lost ticket sales, a budget shortfall that will have to be made up by more government funds. In addition, local sponsors contributed more than $3 billion to the operating budget, but got little return with few fans.

Hashimoto, the head of the organising committee, indicated Sunday that Sapporo would bid for the 2030 Winter Olympics.