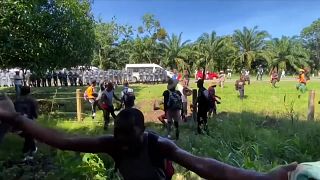 Dozens of migrants on Thursday were detained by officers of Mexico's migration authorities and the national guard, as they walked through the southern state of Chiapas on their way to the United States.

Before authorities started the raid nearly two hundred people were in the group.

The group had left Tapachula in recent days after waiting for their transit papers from migration authorities.

The National Guard has deployed more than 14,000 troopers in the south.