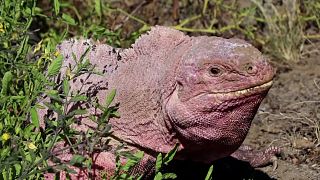 The rare Galapagos' pink iguanas earlier this week were declared as a critically endangered species by environmental organizations, after an expedition in early August estimated only 211 specimens still populate their native Wolf Volcano.

The scientific expedition by the Galapagos National Park, along Galapagos Conservancy, Island Conservation, were tasked to determine the size of the current population, hatching areas, and young specimens.

Scientists caught only 50 pink iguanas and didn't find newborns, enough for them to estimate the population is of 211.

Pink iguanas are only endemic to the northwestern slopes of the active Wolf Volcano, in the Isabela Island, where an eruption in 2015 had already endangered them.

After the recent findings, the Galapagos National Park created a conservation plan, increasing the monitoring periods in the area for scientists and park rangers with the goal of finding nests.

Scientists installed camera traps near the summit, outside a nest of an iguana. In recent days, footage has shown rodents in the area.