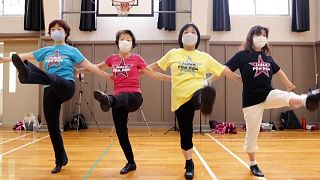 Cheering is frowned upon at the virus-postponed Olympics, but training continues at a Tokyo gym for an energetic squad of cheerleaders whose average age is 70.

There is a strict selection process for members, who must be over 55, and have to pass an audition and three-month trial period.

They are currently rehearsing for their 25th-anniversary show, which was postponed until next year because of the pandemic.

Cheerleading is a fun way to stay fit for the "Japan Pom Pom" girls, who get together once a week for a rigorous two-hour practice with almost no break.

Japan has the world's oldest population, with around 28 percent of the population aged 65 or over, according to the government.