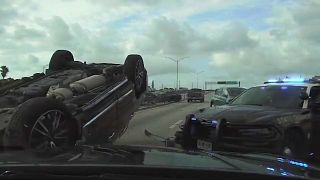 The Florida Highway Patrol released video on Tuesday, July 20, showing a high-speed car chase on a Florida highway come to a dramatic end as the SUV being pursued by police hits two other cars and then a guard rail before flipping over.

The video was captured on May 19 as officers were chasing a car carrying a group of five teenagers who had earlier attempted to steal an SUV from a residence in Fort Lauderdale, according to news reports.

The vehicle is seen crashing into two other cars as it appears the driver is trying to get off the I-95 highway at the exit to Pembroke Road. The driver loses control of the vehicle that goes airborne and flips over.

A police car is then seen ramming into the overturned vehicle before officers swoop in with guns drawn. All five teenagers reportedly suffered serious, but non-life-threatening injuries and were all facing several charges.