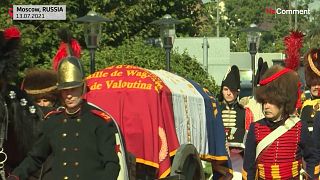 Remains of French general who died in 1812 returned to France

A departure ceremony is held in Moscow for the remains of a Napoleonic general Gudin who died in 1812 near Smolensk during the Russian campaign. The remains are being returned to France.

The general was found in 2019 thanks to Pierre Malinowski, a French historian and ex-military close to the far right and with support in the Kremlin.