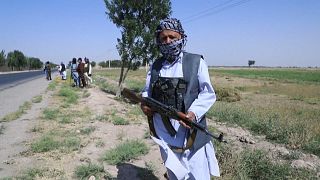 Anti-Taliban militia deploy in the western Afghan city of Herat after veteran warlord and former mujahideen Ismail Khan, whose fighters helped US forces topple the Taliban in 2001, vowed to take up arms again as the insurgents closed in on the stronghold.

Afghan authorities prepared Saturday to try to retake a key border crossing seized by the Taliban in their sweeping offensive to capture new territory that led a veteran warlord to deploy his militiamen in the western city of Herat.

As US troops continued their withdrawal, the Taliban said its fighters had seized two crossings in western Afghanistan -- completing an arc of territory from the Iranian border to the frontier with China.

It now holds 85 percent of the country, a Taliban official said Friday, controlling about 250 of Afghanistan's nearly 400 districts -- a claim impossible to independently verify and disputed by the government.