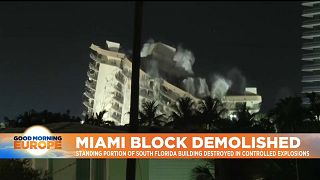 The precarious, still-standing portion of a collapsed South Florida condo building has been demolished in a series of controlled explosions.

The decision to carry out the operation came amid mounting concerns that the damaged structure was at risk of falling, endangering search and rescue crews below - and preventing them from operating in some areas.

An approaching tropical storm Elsa has added urgency to the concerns. President Joe Biden declared a state of emergency in Florida because of the storm which makes

Although the storm is expected to move further west, South Florida could still get strong winds.

Rescuers awaited the all-clear and then immediately dived back into the task of trying to locate any survivors buried under the rubble.

They are hoping to get a clearer picture of voids in the rubble that could harbour those people still missing.

No one has been rescued alive since the first hours after the June 24 collapse. So far, rescuers have recovered the remains of 24 people, with 121 still missing.