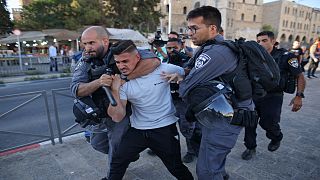 Israeli police used a water cannon spraying skunk water to disperse Palestinian protesters from Damascus Gate in east Jerusalem on Thursday, the epicenter of weeks of protests and clashes with police in the run-up to the Gaza war.

Calls had circulated for protesters to gather at Damascus Gate in response to a rally held there by Jewish ultranationalists on Tuesday in which dozens of Israelis had chanted "Death to Arabs" and "May your village burn."

The police had forcibly cleared the square and provided security for that rally, part of a parade to celebrate Israel's conquest of east Jerusalem.

The clashes came as a Palestinian teenager died Thursday after being shot by Israeli troops in the occupied West Bank during a protest against a settlement outpost, the fourth demonstrator to be killed since the outpost was established last month.

Tensions remain high in the region following the 11-day Gaza war in May.

Activists mobilized by Gaza's militant Hamas rulers launched incendiary balloons from Gaza into Israel for a third day on Thursday despite Israeli airstrikes the day before, the first since last month's cease-fire.