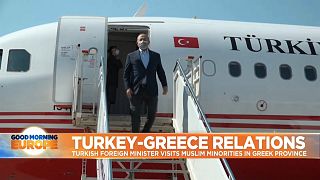 Greek and Turkish leaders are to meet in two weeks time amid renewed tensions over rival claims to energy resources in the eastern Mediterranean, the two countries announced on Monday.

Kyriakos Mitsotakis and Recep Tayyip Erdogan will meet on the sidelines of the NATO summit, held in Brussels on June 14.

The high-level meeting was announced by the two countries foreign ministers, following a meeting on Monday in Athens.

Prior to the meeting, Turkey's foreign affairs minister, Mevlut Cavusoglu, had already angered officials in Greece by visiting representatives of the Greek Muslim community in Thrace and complaining of "unequal civil rights"

Greek Foreign Minister Nikos Dendias said in a statement following their meeting: "We are fully aware that we and Turkey each hold different and, in several crucial issues, diametrically opposite positions."

"The purpose of our meeting today was to initially attempt to establish common ground and then, if possible, to proceed with the gradual normalisation of the situation in the longer term," he added.

He also announced that the two countries had decided to recognise each other's COVID-19 vaccination certificates and had agreed "on a limited list of economic cooperation programmes."

Tensions between Athens and Ankara flared up last summer after turkey began exploratory drilling in the eastern Mediterranean, in waters claimed by both Greece and Cyprus.

Greece accused Turkey of violating international law, an accusation Turkey has staunchly refuted. The European Union — of which both Greece and Cyprus are members — has meanwhile threatened to impose sanctions on Ankara.

George Tzogopoulos, a senior research fellow at the Institute of European and International Studies and International Relations and lecturer at the Democritus University of Thrace in Greece, believes both sides are eager to start the high-level talks:

"That's why Foreign Minister Cavusoglu is in Athens today, a visit that is following day one of his Greek counterpart in Ankara a few weeks ago. So what we are observing is that the two sides are prepared to talk, but this does not mean that the talks will yield results," Tzogopoulos said.

The question is up to what extent diplomacy can work behind closed doors. It seems to me that it is difficult for breakthroughs to be expected."

"Perhaps this can bring some new hopes, but still, I'm very reserved judging on the previous historical experience about the failure in reaching compromises," concluded Dr. George Tzogopoulos.