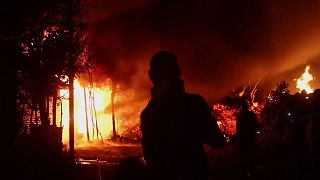 A volcano in the Democratic Republic of Congo unleashed lava that destroyed homes on the outskirts of Goma, but witnesses said Sunday that the city of two million had been mostly spared.

Smoke rose from smoldering heaps of lava, and local residents sifted through the rubble from ravaged buildings.

Residents said there was little warning before the dark sky turned a fiery red, leading to fears that the eruption could cause the same kind of devastation as the last time in 2002 when hundreds died.

There was no official word on if there were any casualties amid the scramble to flee the city late Saturday.

The U.N. peacekeeping mission had said that it didn't appear the lava was flowing toward Goma based on reconnaissance flights, but untold thousands still set off in search of safety.

Some boarded boats onto Lake Kivu while others attempted to reach Mount Goma, the highest elevation point. At least 3,000 fled across the nearby border into Rwanda.