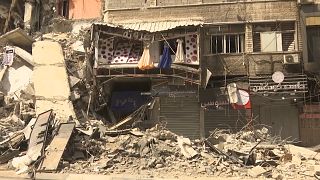 Omar al-Mukhatar street, lined with clothes and food shops, was covered in debris, smashed cars and twisted metal after a towering 13-floor building in its center was flattened in an Israeli airstrike.

Clothes were covered in soot and strewn on the floor.

Broken glass covered the streets and sidewalks, as municipality workers tried to clear up.

Saturday marked the first full day of a truce that ended the fourth Israel-Hamas war in just over a decade.

During the fighting, Israel unleashed hundreds of airstrikes against militant targets in Gaza, while Hamas and other militants fired more than 4,000 rockets toward Israel.

More than 250 people were killed, the vast majority of them Palestinians.