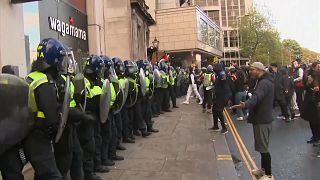 Police clashed with protesters in London on Saturday as thousands turned out to demonstrate against the Israeli offensive in Gaza.

Protesters marched to the Israeli Embassy chanting pro-Palestinian slogans and waving flags and banners, calling on the British government to take action in the wake of this week's clashes between Israel and Hamas militants.

Officers were hit by bottles and objects thrown by protesters.

Earlier in the day demonstrators chanting “Free Palestine!” marched through London's Hyde Park before they gathered outside the embassy gates.

Organizers demanded that the British government stop its backing for Israel.