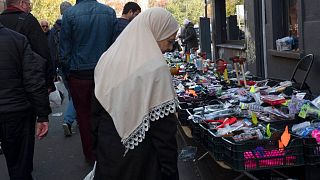 The wearing of a headscarf on an electoral poster by a La République En Marche (LREM) candidate, Sara Zemmahi has caused a stir in French President Emmanuel Macron’s political party.

Stanislas Guerini, who helped found Macron’s centrist movement in 2016, has threatened to withdraw the party's support for her in the upcoming regional elections.

"The values ​​carried by LREM are not compatible with the ostentatious wearing of religious symbols on an electoral campaign document. Either these candidates change their photo, or LREM will withdraw their support."

Alongside the photo of a campaign poster, showing Zemmahi with three running mates for the southern city of Montpellier, Bardella asked the Minister for Citizenship Marlène Schiappa, "Is this the fight against separatism?"

On Tuesday evening, he went further, accusing the candidate of being "an Islamist militant", during an interview on French television.

Guerini's position was backed by government spokesman Gabriel Attal, although he stated that "legally, nothing prevents a person from running for an election with a religious symbol, in this case, a veil."

"What Stanislas Guerini said is that for La République En Marche, we do not want to present candidates who appear on official campaign documents with an ostentatious religious symbol. It is a question of political choice, " he added.

Several deputies quickly disputed this reframing of the argument: for the MP of Val d'Oise Naïma Moutchou, "to reject this candidate would be discrimination. Contempt for the law is the RN's agenda. Not ours," she added.

Hérault LREM MP Coralie Dubost also condemned Guerini’s ultimatum: "I disagree with my political party. When you have a young female engineer, who volunteers, who joins a party to promote progressive values whether it is veiled or not, it has its place with us. "

Her colleague, Sacha Houlié even called on Guerini to "hand over" stressing that "relaying the National Front is to deny the very reason for LREM."

Following questions from many deputies, Guerini explained that he was not asking for a modification of the law. "With hindsight, I think it was a mistake to answer Bardella" and "if some were offended, I apologize," he added.

Macron's opposition has also dived into the debate; "Fight against separatism? Hypocrisy on the march!" tweeted The Republicans deputy for Alpes-Maritimes, Eric Ciotti.

The leader of The Republicans in the National Assembly, Damien Abad, went on to table a bill to impose "religious neutrality when one is a candidate in an election."

During questions to the government, Julien Ravier (LR) highlighted the "deep division within the majority" on secularism, which recently focused on the debate over whether mothers accompanying children on a school trip should be able to wear the Muslim headscarf.

"The presidential majority has no lesson in secularism to receive from you," replied Marlène Schiappa, recalling the LR vote opposing the bill fighting against separatism.

Back in Montpellier, the LREM candidates are surprised by the response to what for them was "not a subject." "We respect the law, nothing but the law," running mate, Mahfoud Benali, said.

"We will "support the president ...with or without a label," added Hélène Ovistgaard, another running mate.

WATCH: Anelise Borges report in the player above