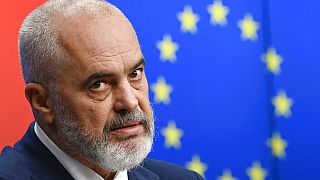 Brussels is planning a fresh push at advancing Albania's membership of the European Union, Euronews has learned.

In June it is set to recommend holding a conference to begin negotiations between Tirana and other EU countries.

Albania became a candidate for EU membership in 2014 and two years ago the European Commission recommended that talks be opened.

But that was subject to EU countries agreeing. France and the Netherlands objected and momentum was lost.

They could also veto the latest push to begin membership talks when it comes before them during an EU summit in June.

BREAKING: The EU Commission will propose a big move forward for the accession process for #Albania ??.

Sources tell me Commission will recommend holding the first Inter-Governmental Conference at the June summit of EU leaders.

EU countries will then choose whether to approve.

"Everybody's expecting a clear decision from the [European] Council [in June] to approve first the negotiating framework, which is going to lay the ground for the accession process between Albania and the European Union, and also a decision about holding the first intergovernmental conference, which is going to symbolise the official start of the accession journey of Albania," Ditmir Bushati, Albania's former Minister of foreign affairs, told Euronews.

"This is certainly a long-overdue decision," he added. "In the case of Albania, we have been in the waiting room for many years, and we all expect to start these accession journey, which hopefully is going to have an immense impact on the democratisation trend, on the economic development of the country and whether or not this will send a clear signal also for the entire region."

"And that's why we really need more Europe to in the region and certainly in Albania. And there are also these demographic threats that are incompatible with EU accession. Therefore, we do believe that accession will offer a sustainable platform for democratisation and the sustained economic development of the country.

"So it's high time to see this process through the lens of historical responsibility as a win-win story."

North Macedonia, Albania's neighbour in the western Balkans, is also hoping to begin EU membership talks. For years, Greece had blocked the country's path to the Brussels club over a name dispute. Now it's Bulgaria standing in Skopje's path.

Hear more from Ditmir Bushati's interview in the video player, above.